NOTE: The parbench project has been superceeded by engulf

I’ve been bits of my free time working on parbench over the last month, a visual version of the venerable ‘ab’ (apache-bench) HTTP load testing tool as a way to get up to speed on clojure. It’s been a fun project as far as getting up to speed, and I thuoght I’d share what I’ve learned about clojure and its ecosystem.

Let’s walk through the tool first, basically, you run it against an URL like ‘ab’, and it shows, in real time, your requests being executed. Each horizontal line is a ‘user’, and each square is a request, it fills from left to right as each user goes through its requests. 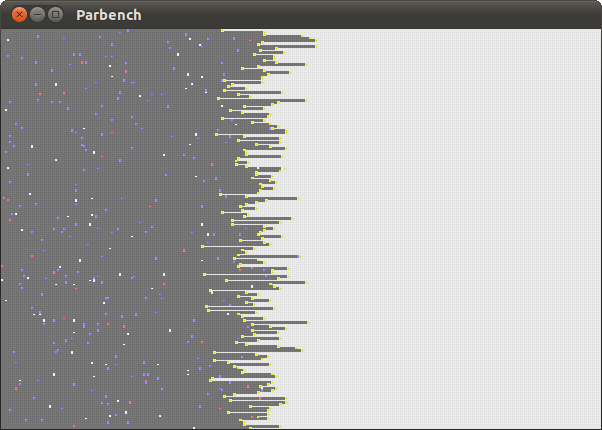 I’m a ruby programmer by day, and the structure here was a bit different than I’d structure a ruby app, as classes / objects aren’t generally used in Clojure code. Rather, the organizing principle is the namespace, and the philosophy behind Clojure is functions operating on core datastructures, or things like defrecord, which, while POJOs in implementation, mimic the core map type.

Clojure has very strong opinions about concurrency, it hasimmutable (persistent) datastructures, software transactional memory, actors, and much more in its bag of tricks. Nothing is mutable in clojure without a fair amount of explicitness. Rather than being encumbering, its actually refreshing, as you spend less time worrying about contention and race conditions.

To get a better feel for how a Clojure program might be built, lets break down parbench. The overall flow of parbench is split into two parts, the http request engine in benchmark.clj and the console and GUI output functions in displays.clj. A brief overview follows:

Impressions of Clojure and the its ecosystem

Overall, Clojure’s becoming my free time language of choice because it’s concise, expressive, and elegant. It’s also a good departure for those coming from more OO languages, and will definitely work different muscles in your brain.

Lastly, I’m pretty new to Clojure, I’m pretty sure parbench’s code sucks in myriad ways. Got some ideas as far as improving it? Let me know!