I’ve got a fun new project up on Github, clj-automata, a short program that can be used to visualize an infinite sequence generated by a given elementary cellular automataton.

Automata are cool, but beyond that, the point of this project was to help people learn Clojure. To that end I spent a lot of time annotating the source code. The code uses lazy-sequences heavily, but does a bit of imperative style code when it comes to interacting with the UI. This is something I’ve noticed quite a bit, graphical output seems to be less than amenable to FP. Given that clj-automata covers ground both in FP and imperative styles I thought it’d be a good learning project for those new to the language.

You can see a snapshot of the running program (the actual code animates, scrolling down) below. Or, you can checkout and run the source yourself. 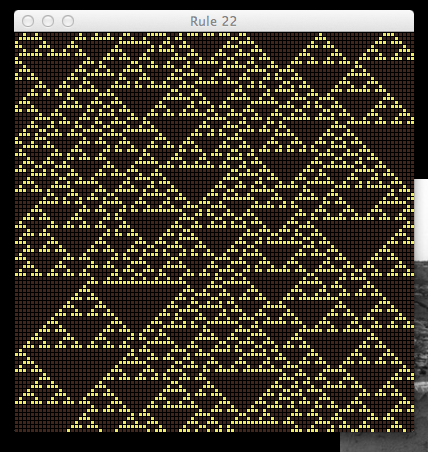